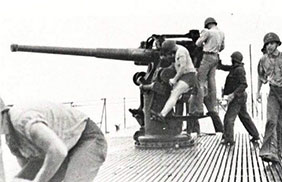 A months-long World War II community lecture series presented by Muskegon Community College will cover everything from the War in the Pacific to the German Blitzkrieg, and from Muskegon's own "Arsenal of Democracy" to the Holocaust.

The lecture series is being presented in conjunction with the USS Silversides Submarine Museum and the USS LST 393 and will include several guest lecturers. Lectures also will be streamed live on the Internet, and will be offered as a for-credit college course.

Beginning on Jan. 6 and lasting through April 21, the public will have the chance to attend any or all of the Monday evening lectures that will be held at the Silversides museum, 1346 Bluff St.