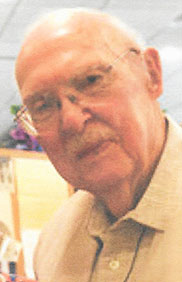 Hessemer made the trip from his home in northern Ohio with his son-in-law, Walter Reed, and two friends so he could visit one of the last two LSTs – landing ship tank – left out of the 1,051 built during World War II. He was captain of LST 573, which served in the Pacific Theater and took part in the invasion of the Philippines. He was called back into service during the Korean War and captained an LST during that conflict.

"I inspected every inch of my ship and my boys knew I would," he said, remembering a crew that jumped at his commands 70 years ago. "They used to compete to see who could get a little shoe-to-shoe tap, my sign of approval."

He shrugged off the changes made to LST 393 during her years as a cross-lake freighter from 1947 to 1973. But he was taken aback when he saw the wooden ship’s wheel in the wheelhouse.

"What the heck is that?" he asked in mock horror. "No LST ever had a wheel like that. We had a thin metal wheel. That looks like something from a sailboat."

He approved of the restorations where volunteers have worked to make compartments look like they did back in 1944. He said he felt like he could sit down and take a meal in the wardroom, where officers were served food during wartime. And he felt right at home in the captain’s quarters, although he pointed out that some of the furniture was not placed quite right.

LSTs were the largest landing craft built – nearly 330 feet long and 50 feet wide – and could go right up onto a beach. They carried tanks, trucks, artillery and almost any other weapon of war imaginable. LST 393 – moored at the Mart Dock on the Muskegon waterfront – is now a museum. It offers tours to view renovated areas of the ship and museum exhibits; it also hosts a wide variety of events and memorials.

Hessemer stood at LST 393’s ramp and spent a few moments looking out through the giant bow doors. The view was of downtown Muskegon, but he was probably seeing a beach in the Philippines where his beloved LST 573 had just successfully landed.