The nation’s top historic ship group honored the founding father of Muskegon’s USS LST 393 Veterans Museum with its most prestigious award this year. 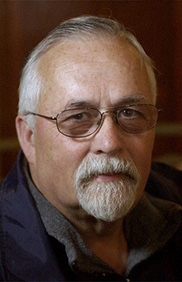 But all Daniel Weikel wants to do is share the honor … with all the volunteers who have made the warship museum successful over the past 13 years.

“It’s a tremendous honor,” said Weikel when he was presented the large crystal-onyx award at the museum board’s annual year-end dinner. “But it belongs to all of you and all the other volunteers who done such amazing work.”

Weikel, of North Muskegon, organized a group in 2005 that leased a rusting freighter at Muskegon’s Mart Dock and began the long process of returning it to its military heritage as LST 393, a World War II “landing ship tank” that participated in three invasions including Omaha Beach on D-Day.

“It is a great pleasure and honor that this year’s winner, Daniel Weikel, receive the Knight Award,” said Dr. William B. Cogar, the HNSA’s executive director, “It recognizes his vision as the founding father of USS LST 393 Veterans Museum and for his tireless dedication to the vessel’s restoration, befitting one of the country’s most historic warships.” 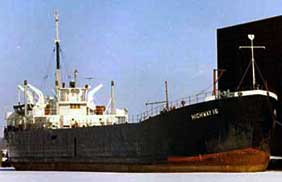 Weikel formed the non-profit corporation, the volunteer group and found the sponsors necessary to start cleaning up the neglected ship known as the Highway 16. The volunteers removed tons of refuse and discarded equipment from the ship. They unwelded the bow doors and dropped the ramp to landing position in 2007 … 60 years after being sealed.

Then as compartments were restored, Weikel began to display his impressive personal collection of World War II memorabilia along with donated items. The artifacts were an important part of the mission statement he wrote: “To restore USS LST 393 … to honor America’s heroes with a veterans museum … and to educate youth about those who served.”

He served as board president, treasurer, chief publicist and crew chief for many years. Currently, Weikel still serves on the board and is active in improving museum displays. The restoration continues and the artifacts have multiplied with many significant historical items, making LST 393 one of the nation’s most unique military museums. 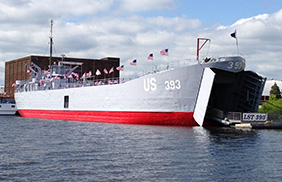 The ship is open for tours from May through September. It features thousands of artifacts and themed exhibits that honor all the military services, veterans from eras back to the Spanish-American War; on board is a nationally recognized war dog memorial and hundreds of military uniforms and headgear. The museum also hosts Scout sleepovers, reunions and a popular free summer film festival.

It is still an all-volunteer group with a solid financial base, as reported during the museum’s year-end treasurer’s report.