USS LST 393 and Rolling Thunder Michigan Chapter 4 commemorated the service of America’s veterans June 3 by marking the anniversary of D-Day, the invasion of France in 1944. LST 393 was there at Omaha Beach and has the battle star to prove it. 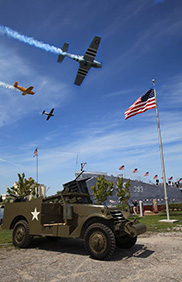 We made it a special day highlighted by a land battle between German and allied reenactors and "Air Raid Muskegon," a mock air attack on the ship by Hooligan Flight Team flying vintage aircraft. LST 393 was "defended" by dozens of World War II reenactors firing replica machine guns and rifles.

Tours of the museum were free and the day included food, fun for kids and many special displays including the Michigan Vietnam Memorial Wall. It was preceded by a USO-style swing dance the night before featuring the Reeths-Puffer High School Jazz Band.