The 2016 edition of USS LST 393 Veterans Job Fair was a rousing success. There were 62 employers and hundeds of job-seekers on board. 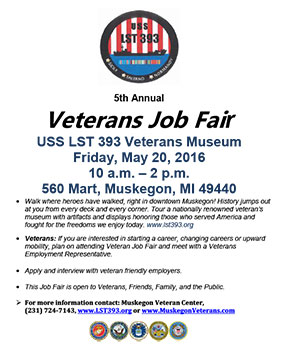 Museum board members Holly Hughes, Mike Baauw and Dave Elingorganized the event with the Volunteers of America and local veterans services offices. They were addressing the jobless rate among veterans in Michigan, which is much higher than it is for non-veterans.

The event was the 5th annual and there is almost certainly going to be one in 2017 (tentatively scheduled for May 19, 2017). Businesses interested in one of the limited number of tables (there is a $50 donation) can download the 2016 registration form (at right). Any company interested in information about the 2017 event can call:

LST 393 is a World War II landing craft that delivered tanks and fighting men in three invasions: Sicily, Italy and in the D-Day invasion of France at Omaha Beach. It is one of only two of 1,051 original LSTs left in America. It is being restored by a group of Muskegon volunteers and serves as a veterans museum honoring all American service members from all wars. It is open for tours May-September.

The USS LST 393 Veterans Museum is an official drop off location for food items being donated the "Muskegon County Needy Veterans Food Pantry."