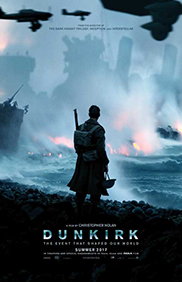 Dunkirk portrays the evacuation from three perspectives: land, sea, and air. It has little dialogue, as Nolan sought instead to create suspense from cinematography and music. Filming began in May 2016 in Dunkirk and ended that September in Los Angeles, when post-production began.