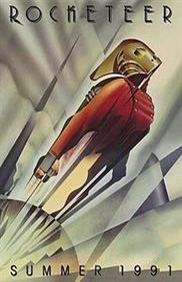 The Rocketeer is a 1991 American period superhero film produced by Walt Disney Pictures and based on the character of the same name created by comic book writer/artist Dave Stevens. Directed by Joe Johnston, the film stars Billy Campbell, Jennifer Connelly, Alan Arkin, Timothy Dalton, Paul Sorvino and Tiny Ron Taylor. Set in 1938 Los Angeles, California, The Rocketeer tells the story of stunt pilot Cliff Secord who discovers a jet pack that enables him to fly. His heroic deeds attract the attention of Howard Hughes and the FBI, as well as sadistic Nazi operatives. Sponsored by the Knapp Family.