The Landing Ship Tank is an ocean going ship capable of shore to shore delivery of tanks, amphibious assault vehicles, and troops.

The LST program was developed in response to a need for armored infantry divisions in invasions by sea. England's failed invasion at Dunkirk prompted Prime Minister Winston Churchill to request that the United States design a ship that was large enough to traverse an ocean, but with provisions to quickly and efficiently unload armored vehicles and personnel on an unimproved beach. The resulting ship design proved to be among the most successful in the history of the Navy. 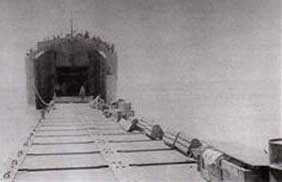 The ships were designed with an innovative ballast system which allowed the flat-bottomed ships to sit lower in the water during ocean transit for seaworthiness purposes, then, by pumping the ballast tanks dry, to raise up in the water, facilitating shallow-draft landing operations. The ballast system was adapted from the systems used by fleet submarines.

The design for the first LST was submitted by John C. Niedermair in November of 1941. The sketch he made became the design for more than 1,000 L.S.T.'s. After a few alterations the final length was 328 ft., a 50 ft. beam, and a draft of 3 ft. 9½ in. She was able to ride higher in the water when in landing trim.

LSTs were a high priority during the war, the second-largest shipbuilding initiative in the history of Mankind. Before the tests were completed on the LST, construction had already commenced. The LST was built in a variety of "Cornfield Navy" shipyards, in rather unlikely locales: Seneca, Ill.; Evansville and Jeffersonville, Ind.; and Pittsburgh and Ambridge, Penn. The Navy was forced to modify bridges, through a "Ferry Command," to bring the LSTs to the oceans. About 670 LSTs were constructed inland.

Many other LSTs were built in existing Navy yards. In fact, the first LST actually took the berth of an already laid aircraft carrier keel at Newport News Shipbuilding and Drydock Corporation, so important was the LST construction program.

In total, eighteen shipyards produced more than a thousand LSTs in three years, a remarkable feat by any reckoning.

At the beginning of 1943, the schedule allowed four months from the time the keel was laid on a new LST to her final fitting-out and commissioning; that schedule was reduced to two months by the end of the war.

From June 1943 in the Solomons to August 1945, the LST was a key element in WWII. They participated in Sicily, Italy, Normandy, Southern France, the liberation of the Philippines, and the capture of Iwo Jima and Okinawa. 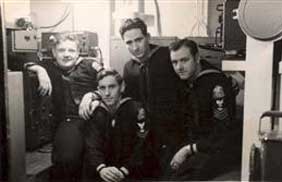 Out of 1,051 LST class ships built, more than a thousand survived through the end of World War II; several WWII LST's served through the Vietnam War era. Though slow by today's amphibious Navy standards, the ships were well designed for a variety of tasks besides the primary mission of armored invasion force delivery.

Even though the crew members nicknamed their ships "Large Slow Targets," the LST endured. There were only 26 losses to enemy actions. At the end of World War II the navy had a large inventory of LSTs. This remarkable warship that performed vital services in the fight for freedom now are almost extinct. Roughly half were scrapped, 20 percent were converted for commercial use, 18 percent were sold to foreign governments, 9 percent sunk, and a few went into private hands; their fate is unknown.