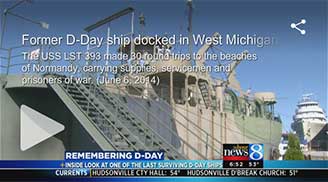 MUSKEGON, Mich. (WOOD) — Allied forced stormed the beaches of Normandy 70 years ago, in the take down of Nazi Germany.

People can tour one of the last surviving D-Day ships in Muskegon.

The USS LST 393 is now docked as a veterans museum. 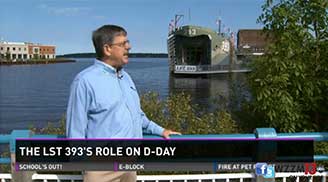 MUSKEGON, Mich. (WZZM) -- At the start of World War II, Winston Churchill said to win the war he needed a ship capable of delivering tanks and troops to a defended shore. Two years later the first LSTs were being tested. 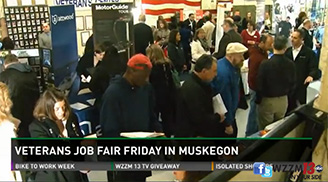 WZZM 13 - Fans gather for rivalry, and to raise money 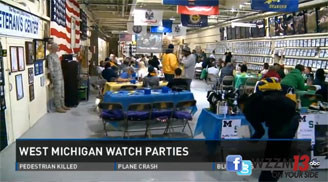 GRAND RAPIDS/MUSKEGON, Mich. (WZZM) - Michigan and Michigan State fans were cheering just as loudly here in West Michigan as they were in East Lansing.

Fans in Muskegon didn't gather just to watch the game, but to benefit a good cause. Big Brothers Big Sisters of the Lakeshore held its first ever tailgating fundraiser, sponsored by Raymond James & Associates of Muskegon.

The event wasn't just anywhere; green and blue fans walked aboard the LST 393 Veterans Museum on the Lakeshore.

WOTV 4 - Walk where heroes have walked 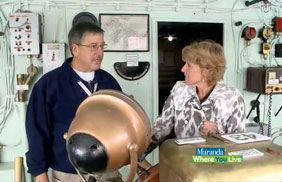 MUSKEGON, Mich. (WOTV) - Walk where heroes have walked and explore the history of the USS LST 393. Opened by the veterans museum, this historic warship and nationally renowned museum is open for visits and public tours. 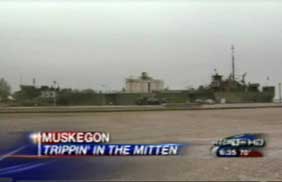 MUSKEGON (WZZM) - There are a ton of great places to go and things to do in West Michigan. So many in fact, many of them often go unnoticed. One of those hidden treasures is sitting on the Muskegon waterfront just 41 miles from downtown Grand Rapids... 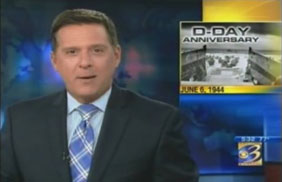 MUSKEGON, Mich. (NEWSCHANNEL 3) - On this date, 68 years ago, Operation Overlord began--now known as D-Day. On June 6th, 1944, a massive amphibious force of American, Canadian and British soldiers moved through the darkness across the English Channel to attack the fortified beaches of Nazi-occupied France...