The bow doors are getting a fresh coat of paint 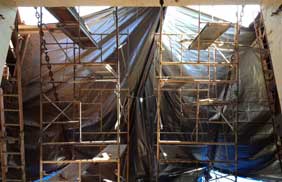 View of USS LST 393 bow door painting project from
inside.

The gigantic bow doors of USS LST 393 are getting a fresh coat of paint … the first in 70 years.

The 14-foot-high doors are one of the most distinctive features of the ship, a World War II landing craft. Through those doors drove 28 Sherman tanks on June 6, 1944, during the D-Day invasion of Normandy.

Scraping and painting the doors and surrounding bulkheads are the latest major renovation project on the historic ship, which is now a renowned veterans museum. Cleaning, repainting and restoring the ship to its warrior heritage began in 2005; the doors-- welded shut in 1947 so the ship could serve as a cross-lake freighter – were opened in 2007.

Of course, the paint being scraped is original equipment. The flaking military paint is being removed carefully by Quality Maintenance Contractors Inc. of Muskegon, a licensed residue removal company. It will be replaced by modern water-based paint.

The new paint job will be the first thing visitors see when the ship opens for the season April 27.

It was fortunate for the all-volunteer preservation group that February was as cold and wintry as it was this year. There is more than a foot of ice around the ship, allowing contractors to work off the surface and dramatically cut the cost of the project.

See images from the project: