The large chart table on LST 393, original to WWII,  was built in Muskegon, Michigan by the Browne-Morse Company. 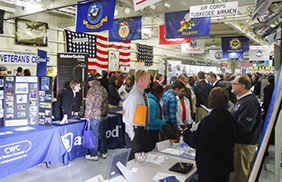 In May 2012 - the first year that a Veterans' Job Fair was held in Muskegon - Robert Wells was an attendee hired to sell insurance.

Two years later, on Friday, May 16, he was the one doing the recruiting.

"The companies that come here are serious," Wells said. "They're willing to hire you even if it's outside of your field."

Wells said that the Grandville-based agency for which he works -- which exclusively sells Allstate products – is looking to open new offices.

The job fair Friday targeting veterans was a success, organizers said. The event on board the LST-393 Veterans Museum attracted about 400 attendees and more than 90 businesses. It's the third year the event has been held in Muskegon.