Walk where heroes walked, right in downtown Muskegon! History jumps out at you from every deck and every corner. Discover LST 393's outstanding wartime record as you tour a nationally renowned veterans museum with artifacts and displays honoring those who served America and fought for the freedoms we enjoy today.

THE MUSEUM IS OPEN FOR THE 2022 TOUR SEASON. IT WILL BE OPEN WEEKENDS 10 AM-5 PM (LAST TICKET SOLD 4 PM) THROUGH MEMORIAL DAY AND THEN WILL BEGIN A TUESDAY THROUGH SUNDAY SCHEDULE FOR THE SUMMER. MICHIGAN HEALTH PROTOCOLS WILL BE FOLLOWED.

Movies on Deck ready for another fun summer

Click the poster to see the full schedule with event details. 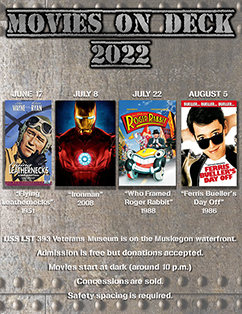 Queue the sunset! Roll down the giant screen! Grab that popcorn bag!

Yes, it’s Friday night in downtown Muskegon and time for the popular “Movies on Deck” at USS LST 393 Veterans Museum.

Now in its 16th year (with a one-year pandemic hiatus), the film series continues to thrive because families and businesses have committed to sponsoring individual movies.

The historic warship’s “Movies on Deck” 2022 has a remarkable lineup, featuring some of the most popular movies of all time. The films are shown on LST 393’s huge screen on the top deck starting right after sunset, around 10 p.m. In August, films start about 9:30.

She was always the unofficial “first shipmate” of USS LST 393.

Lucy Sorenson Pape wielded the champagne bottle that launched the ship in 1942 in a ceremony at her father’s shipyard. She was so proud she kept the beribboned broken bottle neck almost all her life, only relinquishing it in 2017 when she knew it would be safe in her ship’s latest incarnation, LST 393 Veterans Museum in Muskegon, Mich.

She was just 11 years old on Veterans Day, 1942, when she was selected to perform the traditional christening at the launch of an LST (Landing Ship Tank), one of a fleet of innovative new landing craft that the Newport News, Va., Shipbuilding yard was constructing as fast as possible.

A shy girl, she was accompanied by her parents to the ceremony; she was told not to tell anyone about her role “and I didn’t.” But she was worried she might hurt the ship when she hit it with the bottle.

Lucy was given the broken neck (in a net covered with festive ribbons) as a souvenir. It became a treasured possession, displayed prominently in her home. Visitors over the years would invariably remark on it, giving her an opportunity to tell the story once more.

In 2016, board members and historians traced Mrs. Pape to her home in Virginia. Though she had to turn down an invitation to attend the annual D-Day commemoration in Muskegon, she was thrilled to know the ship was thriving and sent the precious artifact back to the ship it helped launch.

It is displayed prominently next to the museum’s other most coveted relic: the American flag that flew over the ship at Omaha Beach on D-Day.

Despite everyone’s best efforts, she was never able to come visit the ship. But board members visited her on the 75th anniversary of the christening to present replica ribbons of those she donated, and made sure she received a bouquet of roses every November 11th.

Contribute to the preservation of USS LST 393.


You can now make a donation to the LST 393 Veterans Museum with any major credit card using our secure Paypal payment form.

LST 393 Through the Camera's Lens 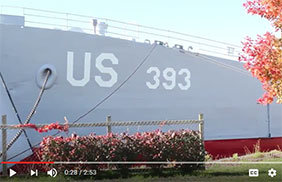 He was a retired Navy LST officer who wanted one last tour around a Landing Ship Tank’s bridge. He made it. Almost. Mathias Joseph Wey became a rarity... Read more »